No
Windmills is a section created by Precession and was added on December 24th, 2018.

This violet section starts with two trusses that lead to a long platform, which includes five windmills with spinning killparts. You have to wait for the right timing to walk and progress and not get killed.

After getting past the five windmills, you jump on platforms that are quite spaced out. You then see another windmill on a platform, which is the sixth windmill. Lastly, you jump across some more platforms until you reach the end of the section. 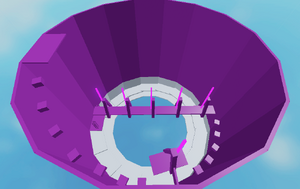 Windmills seen in Roblox Studio (referred to as Windmill Walkway).