No
Wall Climb is a section created by Maghster and was added on December 24th, 2018.

This very dark green section starts with a thin platform which you jump on to get to the first layer. You then have to cross to the other side of the first layer in order to be able to jump up to the second layer. The second layer has two wraparound walls on it. It leads to a platform with three killpart jumps, the third jump being twice the size of the other killparts. This leads to a scalable steep slope, which in turn leads to two more killpart jumps you need to pass in order to reach the end of the section. 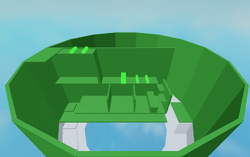