Yes
Volcano is a now-removed section created by ScripterAsh and was added on August 20th, 2018 and removed on December 24th, 2018.

This brown section contained a thin line that connected to a sloped platform where killparts would pop out and move up and down like a volcano.

The player would have to walk across the platform and dodge the killparts to make it to the end of the section.

This section was removed because the spikes would pop up from below the ground. This made the section extremely unpredictable as you could not see where they were going to come from.

You could also very easily make it through the section by going along the side, which defeated the purpose of the section. 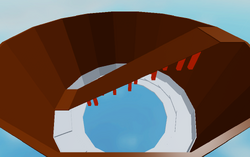 Retrieved from "https://tower-of-hell.fandom.com/wiki/Volcano?oldid=56842"
Community content is available under CC-BY-SA unless otherwise noted.