No
Up is a section created by EnJiEsu and was added on September 29th, 2018.

This light brown section starts with a 1 stud block. The player then jumps on a platform connected to a killpart. There are several other identical platforms connected to the killpart on all sides, making it look like a tree. After climbing the tree, the player is led to some more small platforms and has to jump across them.

After that, there is a thin platform on the wall with four killparts. Finally, the player has to hop to some platforms, then a truss and three platforms leading to the end of the section. 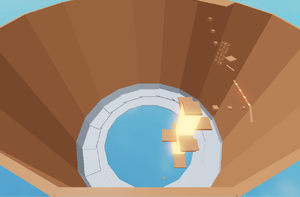 Up seen in Roblox Studio.