Yes
Tower Climb is a now-removed section created by RandomPlayerONthis and was added on December 24th, 2018 and removed on June 18th, 2019.

This dark stone gray section started with a large platform in front of the starting platform that took you to a tower you had to climb.

The tower had many small platforms and thin lines the player had to jump and walk across to reach the top of the tower.

In front of the top of the tower, there was another large platform like the one at the beggining of the section the player had to walk across to finally reach five platforms that took you to the end of the section.

Some people thought this was removed because the base of the tower was pretty low down, making it incompatible with several sections (i.e. Crimson Dive).

According to uwuPyxl, Tower Climb was removed because there were “too thin parts”, what he was referring to were the 2 thin lines that were a part of the section. 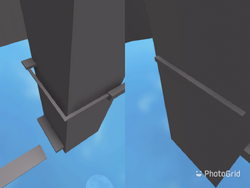 An example of the lines that were too thin. 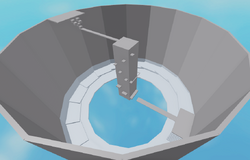