Yes
Tight Squeeze is a now-removed section created by Crystonus and was added in August 14th, 2018 and removed on September 11th, 2018.

This section was removed because Crystonus was demoted from the builder role and then requested to have their sections removed from the game.

Their other sections All Around (Crystonus), Checkered (Crystonus), Hollow Cubes, Pancakes, Rolling Around and Sweeping were also removed at the same time.

Crystonus showing when the creator value was glitched and appearing in the middle of the section.

Example of a part of the section being higher and colliding with another section. 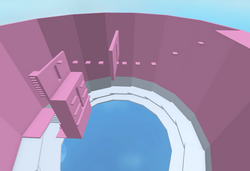 Another image of the section in Roblox Studio.