View source
Warning:
Any comments revealing or hinting towards the codes of the vault will result in an instant block; this is your only warning.

No
The Vault is a secret section created by uwuPyxl and was added on May 6th, 2020.

This light gray section starts with a small block that leads onto a large block with a giant safe that has a 0-9 number pad, an enter button (E), a clear button (C), and a cosmetic handle. If the player enters in the correct code, the safe will open. Inside there is a smaller safe that potentially has the infinite jump coil and a plastic jump coil effect for the player's left arm. Unfortunately, the player can't keep the jump coil forever; however, they can still keep the plastic version of it.

The Vault with the large safe locked.

The message displayed after pressing enter on the number pad with the correct code.

The inside of the first safe after pressing enter on the number pad with the correct code.

What happens when pausing an opening vault with the hourglass gear. 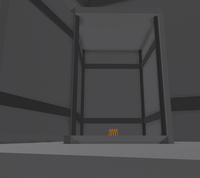 The Orange Coil inside the second safe. 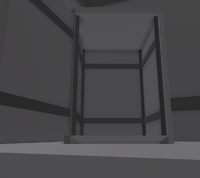 "NICE" (only appears when entering 69 on the code)

The underside of The Vault