No
The Spinning Duo is a section created by Precession and was added on November 18th, 2018.

This light blue section starts with two trusses which bring you to a platform that takes you to two circles, which are followed by 10 circles the player must jump across. There is a spinning killpart, meaning the player has to avoid the spinning killpart while jumping across the circles. 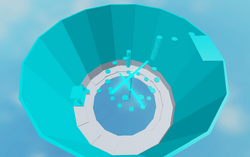