No
The Meetup is a section created by uwuPyxl and was added on April 23rd, 2020.

The player must jump from a rectangular platform onto the circle and move along with the platforms as they appear and disappear, dodging the lasers along the way.

After that they have to jump onto two smaller disappearing triangles to reach the end of the section. 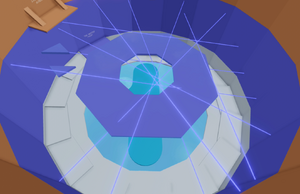 A GIF showing the shortcut of this section.
Community content is available under CC-BY-SA unless otherwise noted.
Advertisement