No
Not to be confused with the effects Halos.

The Halo is a section created by Precession and was added on November 18th, 2018.

This azure blue section contains a large spinning wheel with killparts strips on it. First, you climb on a truss. After that, you would jump on a block.

You would then be presented with a "ferris wheel" that you jump on, and then jump ahead of the killparts on it. The section ends when you jump off of the wheel onto a block, and then climb a truss to the end of the section.

What happens when the section glitches out.
Roblox Studio 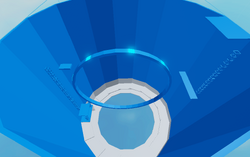 The Halo seen in Roblox Studio.

Community content is available under CC-BY-SA unless otherwise noted.