No
The Challenge is a section created by doublec_squared and was added on June 18th, 2019.

This lime section starts with two ladders that lead to one long platform with a large brick on it. There is a ladder on the side, allowing players to climb on it, and there are killparts in the back and the middle. It leads to three bricks that slowly become smaller, followed by two more one stud jumps, that lead to three platforms. There is a drop to two one stud bricks, which leads to a longer brick. After that, there is a killpart with blocks at the front and top, and a 2x2 brick that leads to a big platform with bricks to jump on to the top and a killpart behind it. After that, there are three one stud jumps that lead to a long brick, and ten more bricks in two different sizes in a pattern. A ladder and two long bricks brings the player to the end of the section.

Side view of The Challenge
Roblox Studio 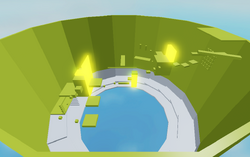 The Challenge seen in Roblox Studio. 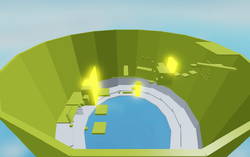 The updated version of The Challenge.