No
Sweeping Tower is a section created by Precession and was added on December 24th, 2018.

This turquoise section starts off with 2 small platforms. It then goes into a tower with a truss to climb to near the top of the tower, as well as a neon wall behind the truss. However, in the middle of the truss is a long, 2-sided neon killpart sweeper.

Players will have to wait for the sweeper to be on the other side as the player. After getting off the truss, there will be several outside platforms to jump on to get to the top of the tower.

The sweeper can kill players on most of these platforms, so players will have to jump over the sweeper if it comes close to them. After going onto the other side of the tower, there will be 5 more small platforms that the sweeper can not reach.

Top of the Tower

On the top of the tower, there is a neon hole in the center which players have to walk around the hole, 5 more circular platforms, a truss to get to those platforms, and another, smaller sweeper that goes around those platforms and the truss.

Since the sweeper goes around the truss, players will have to wait until the sweeper is away from the truss and climb on top of it. After hopping on the platforms, there will be an open cylinder that you have to jump on top of that marks the end of the section. 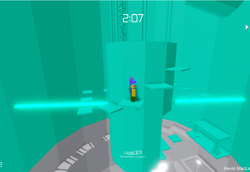 View of the side of the tower. 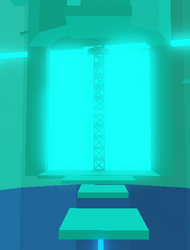 View of the start of the section.
Roblox Studio 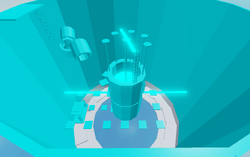