No
Summit Climb is a section created by Flre_Ball and was added on December 24th, 2018.

This faded baby blue section starts off with the player climbing a couple of trusses, and then seven 2x2 jumps with small spinning killparts. It then leads to a C shaped line with killparts that increase in width.

There is a line against the wall with a killpart in the middle, leading to a truss that leads to another line with a killpart in the middle which then leads to a platform with two killparts the player must jump on. This is followed by a ring of small platforms with a large killpart spinner. Finally, there is another line with two killparts and two more small platforms, which lead to the end of the section.

A view of the section from another angle.
Roblox Studio 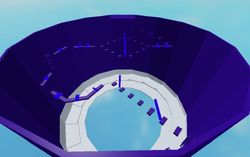 An older version of Summit Climb seen in Roblox Studio. 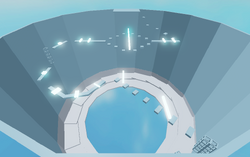