Yes
Not to be confused with Slippery Snake.

This shamrock green section started with a light platform. The platform splits into two ways. The first way has long blocks that make the player slip if the player stood on them for too long. The second way has some slippery balls leading to the end of the section.

This section was removed because it included the ice mechanic (where you would slide on the floor). This mechanic is no longer allowed to be used for sections in Tower of Hell. 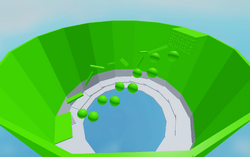 Slippery seen in Roblox Studio (referred to as Adsbv's prototype).

Retrieved from "https://tower-of-hell.fandom.com/wiki/Slippery?oldid=59162"
Community content is available under CC-BY-SA unless otherwise noted.