No
Shimmy is a section created by Flre_Ball and was added on October 21st, 2019.

This light gray section starts by climbing on two trusses and hopping onto the platforms that have two neon strips on the sides. Players would start to progress into the middle in which there is a plus symbol that includes a neon brick in the center. Players will see two paths where both of the paths are the same that have the same platforms mentioned before. 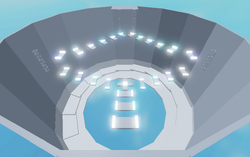 Retrieved from "https://tower-of-hell.fandom.com/wiki/Shimmy?oldid=57725"
Community content is available under CC-BY-SA unless otherwise noted.