No
Rubiks Cubes is a section created by Archimetropolis and was added on December 24th, 2018.

This blue section starts with two empty 6x6x6 bricks leading to the shape that of a Rubik's Cube in which the killparts are distributed without a pattern. The third though is being moved as if it were an actual Rubik's Cube.

This is repeated again upon going to the next cube without the supposed moving. The beginning idea repeats again but with two 6x6x6 bricks using the same concept of the larger cubes. Yet again, the same idea is repeated.

The last section has two rotating cubes that have randomly distributed killparts. The player has to avoid the killparts while climbing the faces of the cube. Be careful not to suddenly run into an upcoming killpart on the rotating cubes. 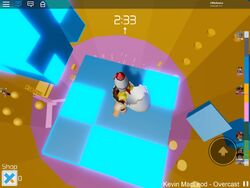 An example of the old killparts.