No
Ripple is a section created by Flre_Ball and was added on August 4th, 2019.

This light blue section starts with two bricks that have two killparts. The next two bricks have a killpart on the lowest end of the brick that leads to a truss in which the bottom part of the truss is a killpart. Then, the player has to hop onto five of the same brick in which the killpart is at the end of a part.

Lastly, the section goes up again with the killpart being on the outer part of the brick-like before, but it is located on the right side of the brick. This leads to a truss, followed by four bricks that bring the player to the end of the section.

Another view of the section.

Ripple seen from another angle.

The final four platforms used to lead you to the right.
Roblox Studio 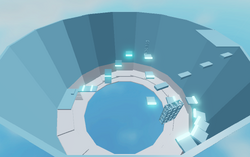