No
Not to be confused with the modded section Pulse.

Pulsar is a section created by Archimetropolis and was added on November 18th, 2018.

The player must climb a truss, then jump across these rotating platforms to get around the pulsar shape, before jumping across a few platforms on the wall to reach the end of the section.

The original section that was submitted for the game, "Black Hole". 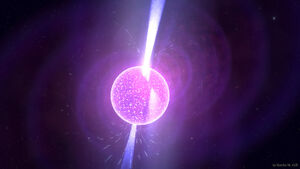 The image of a pulsar that the final version of this section was based on.