No
Not to be confused with the secret sections Pride Picker or Pride TV.

Pride is a secret section created by uwuPyxl and was added on June 1st, 2021.

This light gray section starts with six platforms arranged in the shape of a triangle and shows the colors of the transgender flag. The platforms lead to a larger platform with three suspended banners that each display a pride flag.

The pride flags that the three banners display are randomized from a selection of 16 flags; the corresponding pride trails will be given to the player when they reach the section.

To complete this section, there are two identical paths from the large platform; they consist of six platforms and show all rainbow colors (the colors of the pride flag). These platforms take the player to the end of the section. 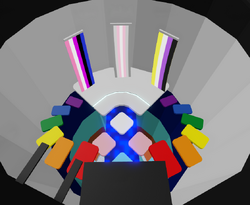 View of the section from the another angle.

A closer view of the six blocks showing the Transgender flag colors. 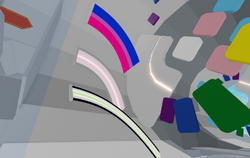 Pride bent by secret section "T", showing the banners' behavior along with their left and right range.

Community content is available under CC-BY-SA unless otherwise noted.