This salmon section starts with a long platform attached to the wall, leading to two more platforms. This will lead the player to a giant box with many poles and obstacules in it. The floor and the roof of the box are killparts. There is also a door for the player to enter the box.

After the player is out of the box, there are three platforms varying in size and length. The player must jump across these platforms to reach the end of the section. 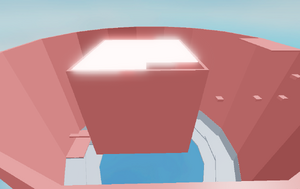 Parkour Box seen in Roblox Studio (referred to as Box of Death).