No
Orbit is a section created by ApplePieNoob1 and was added on June 18th, 2019.

This faded yellow section starts off with a truss. The next part of the section consists of four cubes of different sizes orbiting around a huge sphere, similar to planets orbiting a star. The player's goal is to get to the sphere by jumping from cube to cube as they orbit. After the player accomplishes that, they have to climb up the ladder in the middle of the sphere. Lastly, they must jump across multiple blocks which leads to the end of the section. 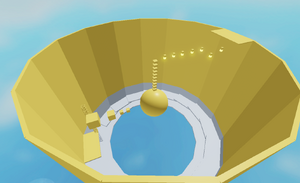