Yes
Line Traverse is a modded section created by Orliminecraft and was added on July 5th, 2019 and removed on April 30th, 2021.

This teal section starts with 3 square platforms that lead to thin lines that go diagonally up and and some others that go horizontal. The player must follow them being careful to not fall off.

Then the player jumps onto a truss that leads to a final platform which takes the player to the end of the section. 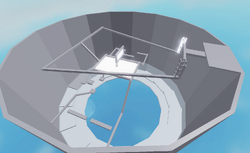 The original version of Line Traverse seen in Roblox Studio. 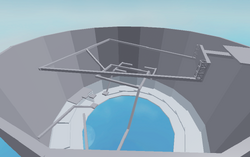 The curated version of Line Traverse seen in Roblox Studio (referred to as Traversing).