No
House is a secret section created by ObrenTune and was added on an unknown date.

This light blue section starts off with 2 trusses leading to a block that leads on to a green platform with a flower garden on its right side. To the left of the green platform is another green platform that has a house with a brown door, beige walls, a red roof, diamond blue floor, and a window. There are two strips of light blue killparts on the walls of the section.

Inside the house is a lightbulb, a red loveseat, an antenna television, a console, and the 2 main developers of the game, uwuPyxl and ObrenTune, playing Tetris Game Night, another secret section. ObrenTune is playing on the console while uwuPyxl is playing on a laptop.

The television inside the house displaying Tetris Game Night.

The backside of the television.

The backside of the television, but the Zekton font is replaced with the Adobe Blank font.

The console adjacent to the television.

uwuPyxl and ObrenTune gaming on the loveseat seen from a lower angle.

ObrenTune's perspective, showing a closer view of the television controls.

The lightbulb killpart inside the house.

The flower garden adjacent to the house.

The truss located behind the house.

The underside of House, showing the different floor color and the shadows casted by uwuPyxl and ObrenTune.
Outdated Gallery

An aerial view of the section when the default killpart color was white. The section also had a darker shade of blue (Credit: Squid Magic).

The lightbulb inside the house when the default killpart color was white (Credit: Squid Magic). 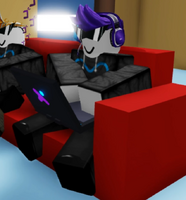 The laptop with the YXCeptional logo (Credit: Squid Magic). 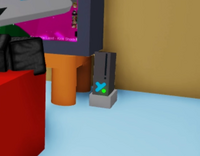 The console with the YXCeptional logo (Credit: Squid Magic).