No
Heartbeat Horror is a section created by Flre_Ball and was added on December 25th, 2020.

This purple section consists of an obbying path around the tower with a giant killpart spinner that chases the player from behind, forcing them to complete the section quickly.

There are then platforms that make the player jump side to side, followed by a path with two more killparts to jump over. Finally, there are a couple more side to side jumps that take the player to the end of the section. 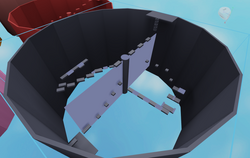 Image of the submitted version of the section.