This dark green section starts with a staircase leading to a large platform. You then turn around and walk across a few more large platforms.

Next there is a hole to drop into surrounded by killparts so you have to be accurate. Then there is a path with killparts along the sides so stay in the middle as you walk.

Finally there is a set of large platforms with killpart squares and lines that you have to avoid, then a truss to the end of the section. 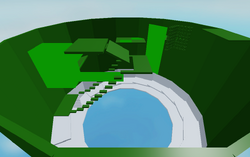