No
Double Spinner is a section created by doublec_squared and was added on June 18th, 2019.

This faded pink section starts with a truss leading to the spinner part. Next, there are nine platforms in a circle that you have to jump across, all while avoiding two killpart spinners.

It then leads you to a truss, which leads to a long, slightly curved platform with normal killpart jumps. There are two ways you could go from there, one being the correct way which will lead you to the next section, the other being a dead end with more killpart jumps.

If you pick the right path, you will then jump onto another five platforms, including a headhitter at the end, which will lead you to the end of the section.

A gif showing the speed of the 2 spinners.
Roblox Studio 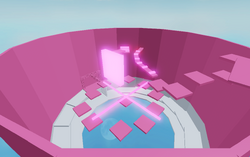 The original model of Double Spinner seen in Roblox Studio.