No
Dizzying Paths is a section created by XxSWxX and was added on December 24th, 2018.

This light gray section starts with a ladder climb using parts. There is one killpart strip on top of the ladder, which forces you to jump off. After, you encounter some spinning platforms that are surrounded by tons of killpart strips. You have to walk through it at the right time or you'll touch the killpart. You then climb up another ladder but there's killpart under the ladder that uses blocks and on top.

You jump off the ladder and there's a long killpart. There are spinning strips of blocks that come out from the left side. You have to go quickly on this part or you'll fall. After, you see a platform that is located under a square with a hole and includes neon. Lastly, you have to do some jumps and a long jump. After that, you jump on some platforms making you reach the end of the section.

An image of this section from the opposite side.

Example of the section glitching.

A gif of the 2 rotating platforms.
Roblox Studio 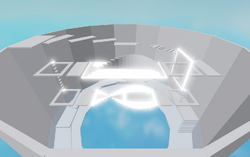