This magenta section started with a wall climb, then the player would have to fall on a large slanted slippery platform with a large killpart above it, meaning the player couldn't jump. The platform also had small killparts you needed to avoid. After that, there were some little platforms which lead to a thin sloped platform that took the player to the end of the section.

This section was removed because it included the ice mechanic (where you would slide on the floor). This mechanic is no longer allowed to be used for sections in Tower of Hell. 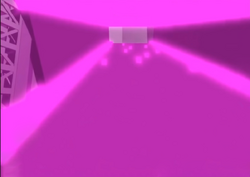 A view of the inside of the section.
Roblox Studio 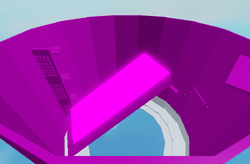 The original view of the inside.