No
Climb is a section created by ScripterAsh and was added on an unknown date.

At the beginning of this light blue section is a truss on the left side. Afterwards, there is a horizontal truss attached to the wall that is required to be jumped on. It then extends into two other identical trusses that are near parallel to each other. 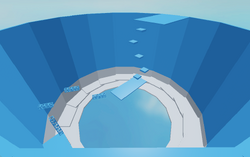 Climb seen in Roblox Studio (referred to as ???).

The script used in the moving platforms.