No
Cherry is a section created by DerHausaufgabe and was added on December 12th, 2020.

This dark red section begins with a ring rotating clockwise and leading to three trusses and another rotating ring identical to the first one followed by a truss ending the section.

A gif of the spinning rings. 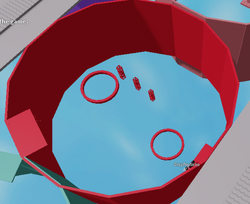