No
Boardway Breakaway is a section created by Flre_Ball and was added on July 14th, 2019.

This beige section starts with platforms going up the wall that the player must jump onto. There is then a repeated pattern of platforms and killparts. This idea is only repeated for seven bricks. The previous idea is used again, but the bricks are descending and have three more bricks. The same idea is also used again, but the bricks are unevenly spaced with one extra brick.

The section then has a rotating killpart that reveals a pathway that has the same brick from the beginning with two 2x2 studded bricks. This goes to a longer platform with another five 2x2 studded bricks ahead in an arch-like manner. The last brick is similar to that of the longer brick mentioned before. The section ends with a truss with four wall ledges to jump onto.

A gif showing the movement of the killpart spinner.
Roblox Studio 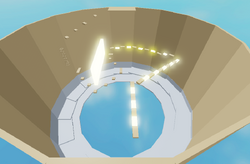