No
Not to be confused with Blender.

Bender is a secret section created by uwuPyxl and was added on February 11th, 2021.

This dark gold section bends the sections above it in the tower by 10 degrees in the direction of the start and end platforms.

The walls of the tower are split into two, the bottom walls and the starting platform are normal, but the top walls and ending platform are inclined at a 10 degree angle. There is a thin pathway around the tower hiding the transition between straight and angled walls, the player can walk around this.

To complete the section, there are two blocks that stick out to the left and right of the starting platform that the player must jump on to reach the end of the section.

A closer view of the start of Bender.

Bender seen from inside a slanted wall, showing the thin pathway hiding the transition from the inside and outside.

A view of Bender via standing on the thin pathway.

Image of Bender from the end of the section.

Another view of Bender.
Outside 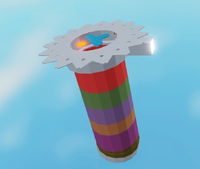 Image showing the outside of the tower when Bender is in it.

Another view of the outside of the tower when Bender is in it. 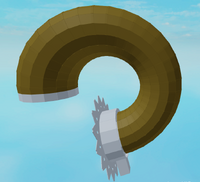 What the tower looks like if there are many of the section in a row.
Beta Version 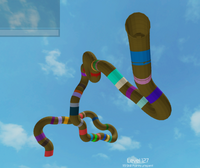 Example of how much the section used to bend in its beta version.

Another example of how much the section used to bend in its beta version.