Formerly 212 (If you count secret sections)

No
Anticipation is a secret section created by uwuPyxl and was added on September 8th, 2019.

This light gray section contains 4 layers (1440 degrees) of the staircase at the bottom.

Initially, Anticipation was not in The Tower of Hell since uwuPyxl did not put any of the secret sections in TToH when it was first released.

However, it has been added as the final section of the tower, giving a current total of 212 sections including MiniTower. It is one of two secret sections that are in TToH.

The section acts as a vantage point that wraps around the MiniTower and gives a nice view since it is tall. It also acts as a long buffer to the end that basically extends the time it takes from touching the end section to the white door.

The TToH Anticipation was removed on February 24th, 2021 after The Tower of Hell got nerfed and now consists of only ObrenTune's sections from the game's release.

Anticipation as seen with Lengthen in effect.

The start of Anticipation seen with Lengthen in effect.

Anticipation seen from the outside of the tower.
Outdated TToH Anticipation 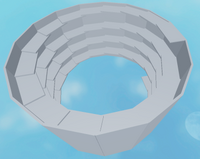 uwuPyxl showcasing Anticipation in Roblox Studio on his Twitter.

uwuPyxl showcasing a tower consisting of numerous Anticipations on his Twitter.