No
Animous is a section created by SulakeGames and was added on September 3rd, 2018.

This teal section contains a lot of killparts that the player must avoid. First, there are four checkered platforms with the first one left of the others. On the fourth platform, the path splits into two paths.

This path, which is the path on the left, has neon jumping parts with the non-neon parts being only one stud wide. It then takes you to neon jumps on the wall, which then leads you to the platform to get to the final neon part.

This part is simple; two stud jumps with some on the wall. It also leads to the platform to the final neon part, but this time, it has a ladder.

The last part has killparts at the edges, checkered killparts and a killpart in the middle. This part can be tricky with hitboxes. Lastly, it goes to three small platforms, which marks the end of the section. 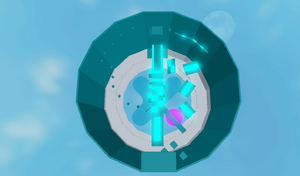 View of the section from above.