No
Not to be confused with the removed section of the same name All Around.

All Around is a section created by primord_ial and was added on June 18th, 2019.

This gray section begins with two semi-wrap around trusses. It then goes to a block and then a pair of spinning platforms with killparts in the middle of each. After traversing the spinners, it then goes to a truss and into an exact copy of the blocks and spinning platforms from underneath. After completing the second set of spinners, the player must jump onto a block and traverse four platforms with killparts in the middle that spins in place followed by five 2x2 stud jumps to reach the end of the section.

View of the section from above. 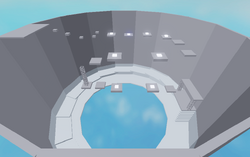 All Around seen in Roblox Studio.